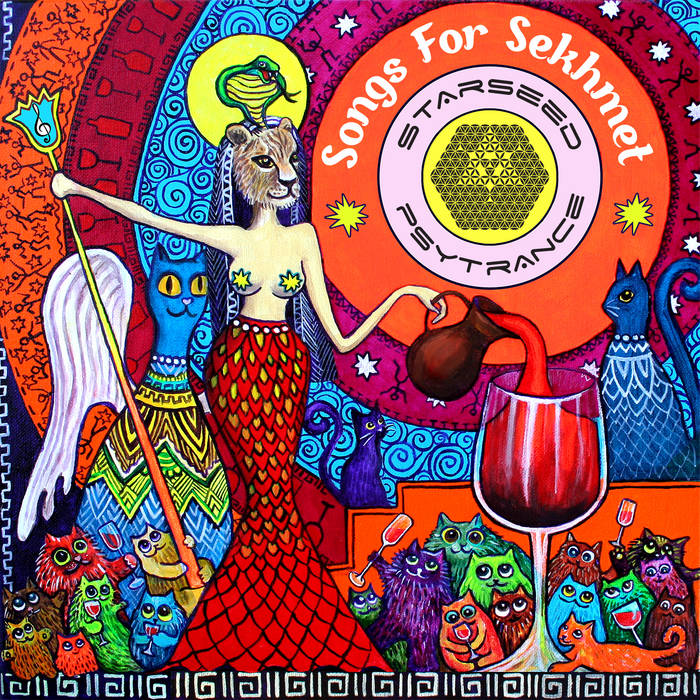 ĿΔḶΐ unique sounds and over all beautiful compilation! Thank you Goldie for putting this wonderful selection together

NYX Loving this release!
In Feb I blasted the dancefloor with Gizma - After the Storm & the crowd went banana's :)

Songs For Sekhmet is the Second Compilation on StarSeed Psytrance.

This All-Femme Goddess release has an Egyptian and Forest Psytrance vibe, and is an Ode to the Ancient Egyptian Goddess Sekhmet.

Welcome to the Temple of Sekhmet Video is a teaser video from
www.BoomBangVr.Com

Sekhmet, one of the oldest Egyptian deities, is the Egyptian Goddess of the sun, destruction, war, sickness, and healing. Her name is derived from the Egyptian word “Sekhem” which means “power” or “might." She is shown as a lion-headed woman, sometimes with the addition of a sun disc on her head. She is said to have created the desert with her breath.

She was associated with the goddesses given the title “Eye of Ra.” According to legend, Ra became angry because mankind was not following justice and balance. He plucked Hathor from Ureas on his brow, and sent Sekhmet to earth in the form of a lion, where she started her rampage. The fields and Nile ran with human blood. However, Ra was not a cruel deity, the sight of the carnage caused him to change his mind. He ordered Sekhmet to stop, but she would not listen. So Ra poured 7,000 jugs of beer and pomegranate juice, which stained the beer blood red, in her path. Sekhmet gorged on the “blood” and became so drunk she slept for three days. When she awoke, she had forgotten her rage, so humanity was saved.

The saving of mankind was commemorated every year on the feast day of Hathor/Sekhmet. Everyone drank beer stained with pomegranate juice and worshipped “the Mistress and lady of the tomb, gracious one, destroyer of rebellion, mighty one of enchantments.”

Enjoy a deep and groovy Forest Psytrance journey that will take you down inside the Temple of Sekhmet!

StarSeed Psytrance is a Record Label by DJ Goldilox and DJ Aluxes/Kukulkan, StarSeed Events and StarSeed Soundsystem owners, and promoters of the outdoor gathering "Star Camp Shasta" near Weed, California.

Bandcamp Daily  your guide to the world of Bandcamp